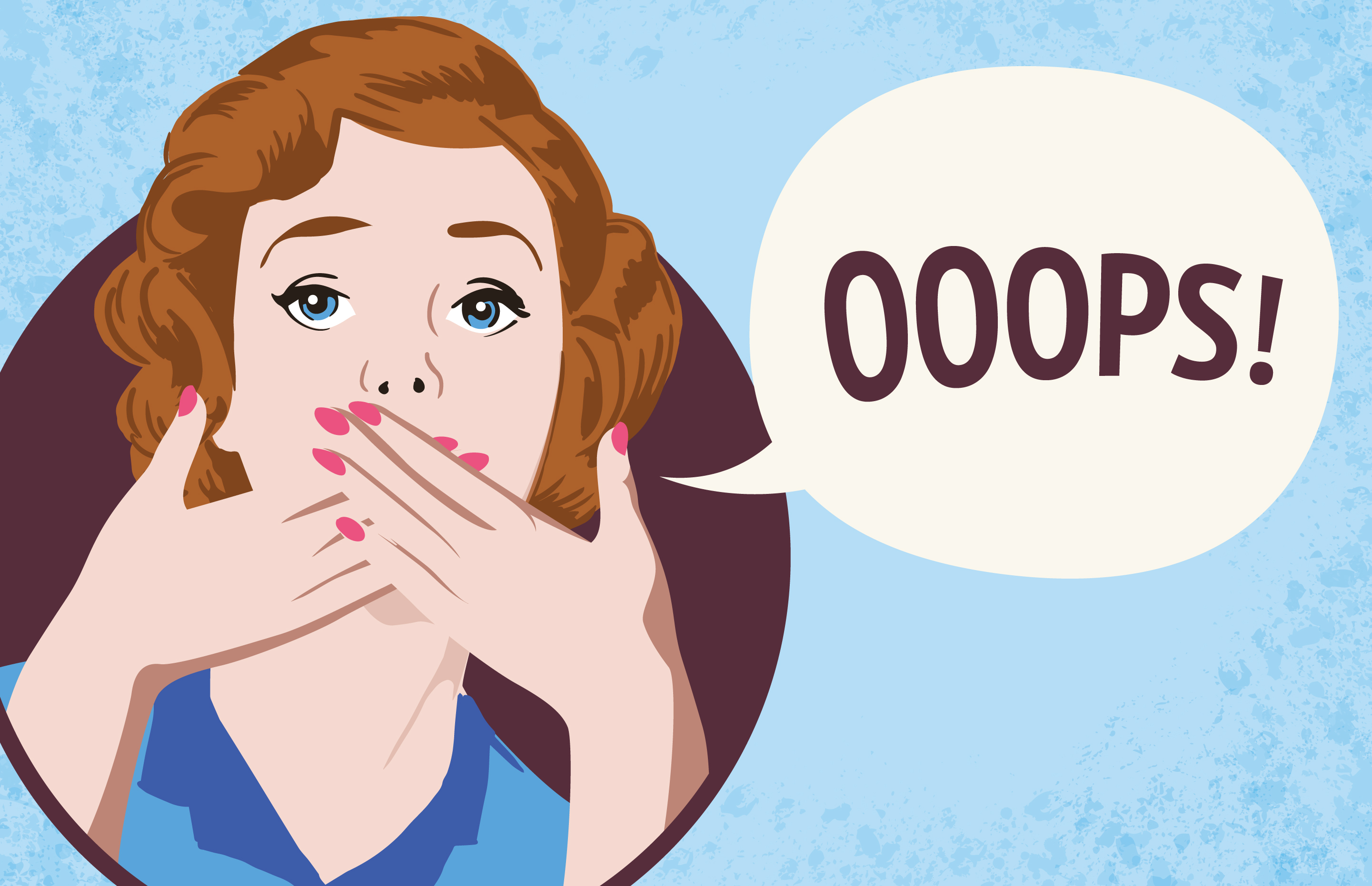 Have you ever had an “oops” moment?  Personally, I really dislike it when I happen to have one myself, which, I did.  “Oops” moments’ drive me crazy and stay in my head much longer than necessary.

I would like to blame Social Media for the pickle I’m in. I’d like to blame Facebook. Who knows, maybe, I’ll have some major catharsis while I write this blog.

So, it is the Fourth of July and I am invited to a friend’s house for the day to celebrate.  I am really looking forward to spending the day with old friends and new friends; you know what I am saying.  I noticed a woman, who I would consider, not just an acquaintance, but someone I know from our mutual organization and various social occasions whom I have really enjoyed spending time talking with.  So, although not a close “friend,” per say,” I have a fondness for her.  So, you could imagine my embarrassment when I casually asked her how she was doing and she replied, “It’s been really hard, Stacey. My husband was so sick for so long.” And, me, being the person I am not picking up on the word, “was,” responded with, “Oh, I am so sorry, I hope he is doing better.”  And, within less than a second another woman, whom I would say I have the same affection for replied, “her husband died, didn’t you know that?”  “Oops!”  Oh, my g/d, I so wished I could have crawled into a deep, dark hole and covered myself up with dirt!  I had no idea her husband had passed away.  “I am so sorry,” I said to my friend, “I had no idea.”  I gently placed my hand on her arm.  I wanted her to know I wastruly sorry that I did not know about her loss and, most importantly, I was truly sorry for her loss.  I can only imagine the pain of losing one’s spouse.  “It was on Facebook,” my other friend said as if I got my daily newsfeed from social media.  Right then, I wanted to shout out, “”Bleep” Facebook,” but I couldn’t.  Instead, I guilted out!

It wasn’t her fault I didn’t know that he had passed and the information had not landed in my ear or even in a telephone text message for my eyes to see.  It’s no one’s fault that I did not know about the death of this woman’s husband, yet, I felt horrible. I felt absolutely terrible; responsible for being inadequate in some way. I would have shown up for the funeral, brought in desert, made a phone call or at the very least, I would have sent a card.  I would have done something had I known after all, that is what a friend does.  But, I can’t help but wonder why on earth do I have to find out about someone’s spouse’s death from Facebook?

When I was a kid, I had a pen pal who lived in Wisconsin.  I loved writing her once a week and loved getting her letters once a week.  When her cousin passed away, she sent me a letter and I sent her a letter back extending my sympathies.  When I was young, I was taught to write thank you notes for gifts I would receive, not just a phone call, although a phone call was a must as well.  As I got older, I looked forward to receiving birthday calls and wedding invitations in the mail and when there was the passing of a family member or a friend, phone calls were made.  Either I was one of those people making the calls to family and friends or someone was calling me with the terrible news of a loss.  It was human communication.  We talked. We spoke.  We connected.  We did not rely on social media to report that something happened to make it true.

There are so many things I begin to think about now.  We report our health issues on Facebook; we discuss our sleep deprivation and the shitty produce at the market; we report our children’s successes and how bad the traffic was on Olympic; we report our anniversaries and our mitzvahs; we ask for prayers for sick relatives.  We discuss our recipes and we can’t forget to write, “Happy Birthday” on someone’s wall or we will feel like crap the next day when we realize we forgot to say, “Happy Birthday” when we finally catch the innocent mistake on a newsfeed of another person’s post. We do this all on Facebook.  Okay.  I can handle all of that.  But, where do we draw the line?  Is social media really a good way to let someone know that there was a death among us?

I later learned, the only way I could have found out about the sad news of my friend’s loss was through a myriad of different Facebook connections that I would have had to navigate. There is simply no way that I would have ever found out but from a random coincidence of, perhaps, landing on my friend’s personal Facebook page. It is so unfortunate that that would be the only way I would find out this news. I may sound like a Facebook snob, but really?

So, you can tell me if I am wrong, but this is not making the least bit of sense to me.  What the heck happened to the old-fashioned telephone call?  “Hello, Stacey, I just wanted to let you know I am making calls for so and so and her husband passed away.  Funeral arrangements are on such a such date at such a such time.”  I mean, come on.  This is one of the situations, I believe, which calls out for a human connection rather than a virtual one.

So, for those who care, I don’t want to find out about someone’s tragedy on Facebook.  Facebook is great for a selfie at a concert or a story about a dog with three ears and many other of our daily realities but at some point, nothing takes the place of a human connection, especially one like this.  I guess it’s great to spread the news but so many people get their feelings hurt because of Facebook.  I am one of them.  I wish Facebook would have somehow sent me a notification that my friend’s husband passed away so I wouldn’t be in this pickle.  All I can say is: “”Bleep” Facebook!”